Het Nieuwe Instituut regularly invites a designer, architect or artist to respond to Sonneveld House, one of the best-preserved private houses built in the Dutch Functionalist style. From 13 February to 22 May this is Mexican artist and architect Santiago Borja. He built an observatory on the roof of the house, which dates from 1933, offering visitors a space for contemplation.

With his work A Mental Image – Blavatsky Observatory, Borja points to the influence of Western esotericism on the architecture movement Dutch Functionalism. In their quest to find a universal visual language at the dawn of the twentieth century, artists such as Piet Mondrian and Wassily Kandinsky drew inspiration from, amongst other things, the writings of esoteric thinkers. Less well known is the influence of these ideas on the architecture of the period. Brinkman and Van der Vlugt, the architects who designed Sonneveld House in 1929, came into contact with theosophy through Kees van der Leeuw, co-director of the Van Nelle Factory. He was an active member of the theosophical society and appointed Brinkman and Van der Vlugt to design the society’s meeting centre in Amsterdam.

Borja’s has dedicated his observatory to Helena Blavatsky (1831-1891), who became known as Madame Blavatsky. In 1875 this celebrated theosophist and two colleagues founded the Theosophical Society in New York. Theosophy is an esoteric doctrine inspired by a need to make the spiritual and mystical relevant again in modern life. It sought a synthesis of religion, philosophy and science. In the early years of the twentieth century, the Netherlands was an important focus of development in both theosophy and modern art and architecture. The modern movement established a pure, abstract and universal idiom that appealed to both esoteric thinkers and advocates of progress.

For his design of the Blavatsky Observatory, Borja made use of esoteric geometry, in particular the invertible cube by Paul Schatz from 1929. Borja considers his observatory to be a space for contemplation: an abstract space where visitors can find themselves through spiritual and spatial awareness. Borja covered his observatory with a thatched roof in acknowledgement of traditional Dutch construction methods. This also complements his earlier work, for example the silo-shaped pavilion, built using an ancient Mayan technique, which Borja placed beside Le Corbusier’s famous Villa Savoye.

Santiago Borja (1970, Mexico) works along the cutting edge between art, architecture and anthropology. He has recently produced work for, among others, the Chicago Architecture Biennial, the Mies van der Rohe pavilion in Barcelona, the VDL Research House in Los Angeles, and the Freud Museum in London. The intervention by Borja at Sonneveld House forms part of a series compiled by guest curator Erich Weiss. After Borja, Eva Rothschild and Dominique Gonzalez-Foerster will each respond to the museum house with a commissioned work.

This series of interventions in the Sonneveld House has been made possible by a generous contribution from the Mondriaan Fund. 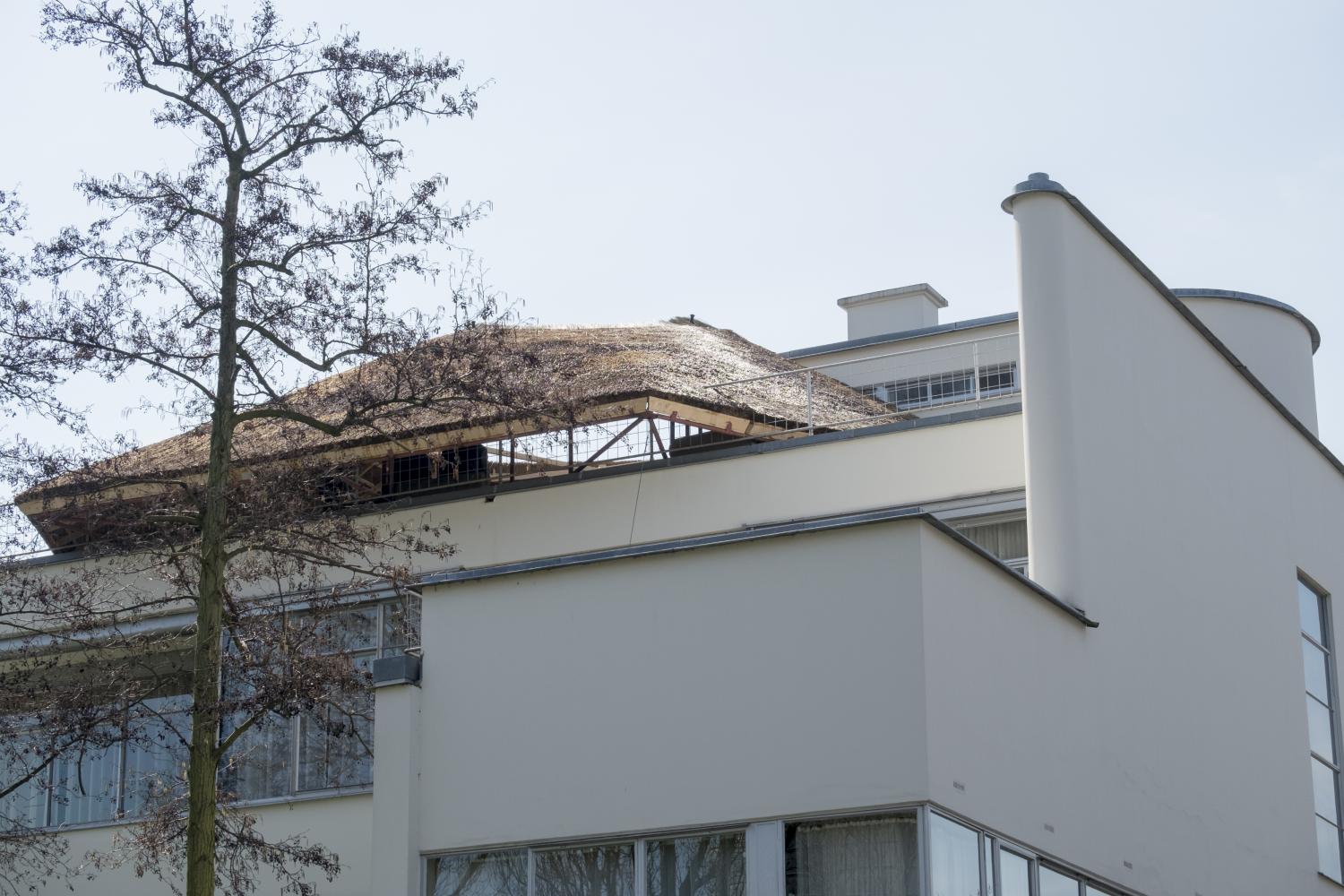